The Official Website of the Holy Metropolis of Abkhazia > Library > All books > Shrines of Abkhazia. Orthodox churches and monasteries. Photo album. Edition No. 2. 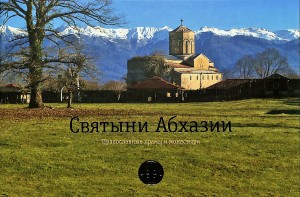 New Athos (Anakopiya): The Publishing Office of the Holy Metropolis of Abkhazia, 2013. – 144 p. The project leader is Hieromonk Andrey (Ampar). The scientific adviser is A.E. Kuprava. The authors of the project are A. Tokarev, I. Platonov. The author of the text is A. Tsymtsba. Design, layout of E. Kharlanov. The editor is D. Arinin. Corrector – H. Marshaniya. Publisher – I. Platonov. Photo by A. Tokarev and T. Tarba. Printed in the publishing office “Leo Tolstoy”.

In the preface to the photo album “Shrines of Abkhazia” a brief description of the history of Christianity in Abkhazia is given under the authorship of Archimandrite Dorotheos (Dbar). In the album there is also a map of location of the Christian temples in Abkhazia.

At the end of the photo album there are materials on the National Church Assembly in the New Athos Monastery on May 15, 2011, where the Holy Metropolis of Abkhazia was founded. As well as the list of the used literature.

The book can be purchased in the church shop of the New Athos Monastery and in the bookstores of Sukhum, Avenue Ayaayra.

The Charter of the Sukhum Eparchial Church-Archaeological Commission. Typography of the Dranda Monastery of Dormition near the city of Sukhum, 1912 – 8 p.