The Official Website of the Holy Metropolis of Abkhazia > Articles > Archimandrite Dorotheos (Dbar): Pilgrimage to the Holy Mount Athos 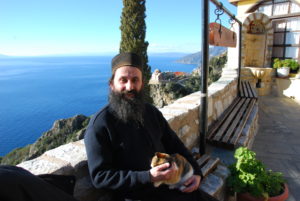 On January 2014, I printed my doctoral thesis in eleven copies and took it to the Aristotelian University in Thessaloniki. While university professors got acquainted with my work(400 pages), I decided to take a final trip to Mount Athos before my return to my homeland Abkhazia.

The Holy Mount (Άγιον Όρος in Greek) is one of the peninsulas in the Northern part of modern Greece. It is the largest center of Orthodox monasticism in the world. On the peninsula there are 20 huge monasteries, a lot of sketes (small monasteries), a large number of monastic cells and huts. The total number of monks (all males) is around 2000 humans. The vast majority of the inhabitants are Greeks. There are monasteries and sketes which belong to the Bulgarians, Serbs, Russians and Romanians. Once the Iberians (Georgians) and Abasgians (Abkhazians) served in the monastery of Iviron. This monastery was built during the period of the Abkhaz-Kartvel kingdom (in Greek ῆ βασιλεῖα τῶν Ἀβαζγῶν καὶ Ἰβήρων, i.e. the kingdom of Abazgians and Iberians). Nowadays, in many monasteries one can meet people from France, England and Germany. In the skete of St. Anne, we met a Frenchman from Marseille, who converted to Orthodoxy and intended to become a monk. His arrival in the Orthodox Church connected with the name of Archimandrite Plakidas (Deseille), a clergyman of the Roman Catholic Church, converted to Orthodoxy in 1977 and became the inhabitant of Simonopetra Monastery on Mount Athos. Later father Plakidas transferred the monastic tradition of the Holy Mountain to France, he founded several monasteries there. He is also the author of a wonderful book entitled “My Way to Orthodoxy”.

Women are not allowed to visit the Holy Mountain. This factor played an important role in the successful spiritual development of the peninsula’s inhabitants. In various Greek monasteries I was asked where I came from and I answered that I was from Abkhazia, from the New Athos monastery. I tried to describe the living conditions of the New Athos monks to monks of Old Athos. I told them about the tourist season, that monks have to listen to music and noise from cafes and restaurants of New Athos city. Monks have to see half naked tourists on the territory of the monastery. They couldn’t imagine such wild living conditions for monks.

By the way, on the entire peninsula of Greek Athos, swimming in the sea is also prohibited. I forgot to say that the territory of the peninsula is closed, and you can get there only by ship with special permission(Διαμονητήριο).

I made my first trip to the Holy Mountain in January 2007, was alone, on foot, without knowledge of the Greek language, for ten days I visited half of the Athos monasteries located on the peninsula. That days I walked about 70 km.

An interesting detail. About three to four months before I left Abkhazia for Greece, I had a dream: I am climbing up the stairs made of stones on a mountain and at some point, I turn around and see that the height I’m at is incredible.

So, when I ascended the path from Kavsokolivia towards the monastery of St. Anne and reached the place where a staircase was made of stones, I realized that it was a place from my dream.

Since 2007 I have made trips to Athos annually. In 2010, I was there with my compatriots Zurab Agrba and Said Kharazia. I also visited the monastery of St. Paul, where our compatriot Hierodeacon David (Sarsaniya) had served for three years.

Most of all on the Holy Mountain I was impressed with the following things. 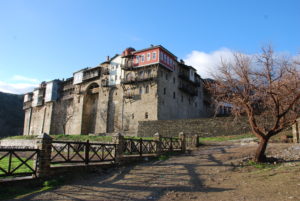 First of all, I was impressed with lifestyle in the monasteries on the Holy Mount.

Inhabitants of these monasteries live according to Byzantine time. The difference between “European” time is around 5-6 hours. On Mount Athos one gets up at 1-2 am, have dinner at 10 in the morning, have supper at 4 in the afternoon and go to sleep at 6-7 in the evening.

Second, Divine Services are performed in churches where there is no electricity but a lot of burning candles and altar lamps illuminate the room. Divine Services are held at night (plus amazing Byzantine singing) and this magic atmosphere helps humans to be penetrated with prayers and meditation.

Thirdly, the majority of young monks have several diplomas of higher education. And it is not only the education of young clergy. The majority of Athos inhabitants arrived there not because they couldn’t live among laity or had a passion to “Medieval romance” but it is for the love of God.

However, simple old monks also made a big impression on me. I don’t know why but all of them are short.

Saint Paisios of Mount Athos served here as well. His quotes are translated into many languages. I have already begun translating some of his quotes into Abkhazian.

Finally, the last one is hospitality. You can attend any monastery there and first of all, you would be invited to the dining-room for having a rest and sipping some coffee. In one of the monasteries we were invited to have dinner with Hegumen at the central table, while the brethren were sitting at the side ones.

Surely, the Holy Mount Athos is the largest center of Christian education and Orthodox culture. 15 800 Greek manuscripts, 3,500 Slavic ones, several hundred Georgian and Romanian manuscripts are stored in the monasteries and sketes of Athos. Many manuscripts are unique.
A few years ago, Mira Konstantinovna Khotelashvili-Inal-Ipa sent me a letter. Here is the extract from it: Once, Lev Nikolaevich Soloviev, our famous archaeologist told that during the conflict between the Russian Athos monasticism and the Greek government, part of the clergy had arrived in Russia and they had different manuscripts. Among those manuscripts there were ones, related to the “History of Abkhazia”, written in Greek, and part of them written with Greek letters in Abkhazian. Lev Nikolaevich said that he was sure of that because he had got that information from dignitaries in Moscow. He didn’t know about the fate of those manuscripts and asked Shalva Denisovich many times to start searching in that direction. However, what they could do in 60s and probably the manuscripts were kept by not kind people. But maybe all these materials were taken back or got into the New Athos Monastery and that’s why, the Mensheviks searched the monastery thoroughly …”

I have no doubts, that in the Byzantine period of their history, Abkhazians used writing on the base of the Greek Alphabet in church manuscripts. Unfortunately, while I was in Greece, I didn’t have enough time to learn better this issue. And all my attempts to find any traces of the medieval Abkhazian Church writing had no success. 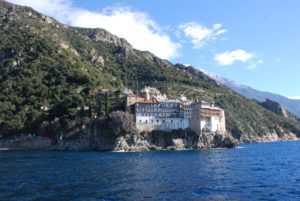 And in order not to forget: the famous miraculous icon of Theotokos from the Iviron Monastery, which is widely known as the the Iviron Theotokos is called the Panagia Portaitissa.

Here is one more interesting story, that I have already described in one of my articles.
In 1821-1823, when the territory of Northern Greece was still under Turkish rule, Mehmed Emin Ali Pasha ruled Thessaloniki. He was sent to Thessaloniki from Damascus. He was known as the punisher of Greek rebels in Chalkidiki (Northern Greece) and the rebellious monks of Mount Athos. In August 1823, by decision of the Sublime Porte, he was sent to Larissa (Thessaly, Greece).

In 1822 Ali Pasha ordered representatives of all Athos monasteries come to him. The abbot of the Monastery of Agios, Dionysios Stephen sent in his place the Georgian monk Hilarion. When the delegates came to Ali Pasha, they showed him a document from the Holy Kinotita (the governing body of Athos), which indicated the names of representatives of all the monasteries on the Holy Mountain. When Ali Pasha saw the name of the Georgian monk, father Hilarion, he stopped for a moment, looked at the monks and asked: “Which of you is Georgian?”. Monk Hilarion answered that it was he and said that he was from Imereti. Then Ali Pasha said that he was from Abkhazia and his father had been an Orthodox priest. When he was young, he was sold to the Turks. Ali Pasha sent all representatives of the monasteries to prison except the Georgian monk. After return on the Holy Mount, father Hilarion was sorry that he hadn’t stayed with other imprisoned monks. He came back to Thessaloniki and he confessed before Ali Pasha and people that he was an Orthodox priest. Pasha ordered to imprison father Hilarion. However, two Abkhazians from Ali Pasha’s security, to whom he believed, asked him not to touch the Georgian monk, because then in Imereti all people would say that Abkhazians had not done their neighbors properly. Ali Pasha released the monk Hilarion. Abkhazians from Ali Pasha’s security took him out from the city of Thessaloniki and ordered him to return to Athos immediately. For his subsequent monastic feats in 2002 father Hilarion was canonized as a saint.

Foundation of the New Athos Monastery in Abkhazia by the Russian monks from the Holy Mount Athos is another story and I have been studying it for many years. When the work is over, it will be published.