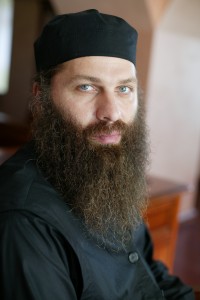 In the same year he entered the Sukhum Art School and finished it as a painter-decorater.

In 1991 entered the Abkhazian State University at the faculty of art-graphic. In April 9, 1992 adopted the Sacrament of Baptizm with Christian name-Adrian.

He graduated from the Academy in 1997.

Andrey Ampar is the first iconographer. He painted many icons for different temples. He also painted the icon of the Saviour with inscription in Abkhazian for the Sukhum Cathedral. In 1997 he became a monk and lived in the New Athos Monastery. In the 14th of April, 1998 he was ordained a monk by Bishop of Maikop and Armavir – Filaret.

He got a Christian name Andrey.

From 2002 to 2004 he delivered lectures on the church art in the New Aphos Theological School.

Fr. Andrey was elected as co-chair of the Diocesan Council of the Sukhum-Abkhaz Eparchy. From 2005 to 2007 fr. Andrey was the head of the Abkhazian Diocese.

On August, 2007 fr. Andrey became a secretary of the Diocesan Concil of the Sukhum-Abkhaz Eparchy.

In the spring of 2011 Andrey Ampar was one of the initiators of the Church National Assembly in New Athos.

On April 4, 2011 fr. Andrey was re-elected as abbot of the New Athos Monastery. On May 15, 2011 he was elected as a member of the Holy Metropolis of Abkhazia Council at the Church National Assembly.

At the first meeting of HMA fr. Andrey was elected as a vice-chairman of the HMA Council.

On May 26, 2011 by decree of the Bishop of Maikop and Adygea-Tikhon, Andrey Ampar was banned on church services for one year, because of the convening of the Church National Assembly and the creation of HMA.

On June 12, 2015 the ban was again extended by Bishop of Maikop and Adygea – Tikhon for three years.

In June 2015 Andrey Ampar left the monastic life and left the church finally.

Since 2015 Andrey has delivered lectures at the Sukhum Art School and the Abkhazian State University.

On October22, 2014 a joint exhibition of pictures by artists Adgur Ampar and Adgur Piliya was held at the central exhibition hall of the Artists’Union of Abkhazia.

On January 25, 2015 an exhibition of Abkhazian artists’paintings was opened in the Gallery of Contemporary Art “ArtProstranstvo Y” at the resort of “Rosa Khutor” (Sochi, Russia). The pictures of Andrey Ampar were exposed at this exhibition too.

Andrey Ampar has become a director of the central exhibition hall of the Artists’Union of Abkhazia this year.

In February 2016 at the exhibition of Abkhaz artists “Best works of 2015” the picture of Andrey Ampar was exposed, entitled “Composition 39”. It was an abstract painting. The picture won the second place.
Archimandrite Dorotheos (Dbar).