The Official Website of the Holy Metropolis of Abkhazia > Orthodoxy in Abkhazia > Churches > Сhurch of Archangel Michael in Duripsh (XIX-XX c.)

On behalf of Community of the Orthodox Christianity in the Caucasus,” the Bishop of Imereti Gabriel (picture №1) went to Abkhazia to review the Orthodox parishes (religious communities) in 1868.

He finished Religious school at the Gelati Monastery. The priest was married to Esma Hyshba, he had four sons (Nickua, Dyrmit, Murat, Hassan) and three daughters (Manya, Nasya and Tsitsa).

After the Russian-Turkish war in 1877-1878 he was forced to leave Abkhazia with his family and went to the Ottoman Empire. The priest took all church utensils with him.

The priest and his family lived in the barracks with other Muhajirs. He didn’t go out of the barracks for three months. He was afraid of being forced to go to the mosque by Turks. He could return to Abkhazia with his family three months later. Buried in the village of Duripsh (picture №2).

Thus, the priest who was mentioned by Bishop Gabriel was Chsyp Tarba. It is possible that the Duripsh Church was built at that time (probably wooden). The Duripsh church could be built before the Russian-Turkish war in 1877-1878 or after it. When he returned to Abkhazia from Turkey.

In 1893, the Bishop of Sukhum – Agafodor visited Duripsh. He baptized 34 persons there.

Books of birth certificate of the Duripsh church community of that time preserved in the archives of the Ministry of Justice of Abkhazia (picture №4). According to these books baptisms, weddings and burials in the Duripsh Temple of St.Archangel were committed by the following priests: the priest of the Duripsh parish Joel (Nicholay Ladariya in 1901-1908), a missionary priest of the Sukhum Eparchy – Tarasy Ivanitsky(1901), priest Nicholay Kirtadze (1901), the parish priest of the Achandara Church – Nodya Simon (1901).

In 1914, an article titled “Day of Joy” was published in the magazine “Employee of the Transcaucasian Mission”. The article reported on the celebration connected with the consecration of a new stone church in Duripsh.

According to the author of this article, the church was collapsed from disrepair in 1910. After that the church service was stopped and the parish clergy lived in the town of Gudauta (apparently, one of them was Nicolay Ladariya).

The church was built of rough stone. The walls inside the church and outside were plastered with cement mortar and whitewashed (picture №6).The temple was provided with church utensils. The iconostasis was old (the one which collapsed in 1910), but it was extended, refurbished and re-gilded.

The ceremony was attended by the priest of the Sukhum Cathedral Protopopov with Deacon Sokolov, priest from Gudauta District – Joseph Lakerbaya. A lot of people gathered from all surrounding communities in the village of Duripsh.

According to church tradition, at first the new church was consecrated with a procession around it. The throne was consecrated in honor of St. Michael the Archangel. The chorus of pupils from Gudauta sang Religious hymns. Then the Divine Liturgy in Abkhazian began. During the Liturgy, the chorus of the Likhny church sang in Abkhazian.

At the end of the Liturgy, priest Nicholay Ladariya gave a speech about the importance of the Orthodox church. His speech made a deep impression on the congregation.

The celebration ended with a modest festive dinner organised by the community of Duripsh. Apparently, Nikolay Ladariya remained a priest of the Duripsh temple untill his death, which occurred in 1924. After his death the temple was closed.

In the Soviet period the church and the church utensils were partially destroyed (picture №7).
In October 2014 the temple was cleared. On October 13, 2014 a blessing of water was held. The clergy of the Sukhum-Pitsunda Eparchy headed by priest Vissarion Aplia. After the service, Vissarion Aplia congratulated on people and said that the church would be restored.

The author of the article is Doctor of Divinity, Archimandrite Dorotheos (Dbar).

Pictures:
1. Bishop of Imereti Gabriel (1825-1896).
3. Metropolitan of Stavropol and Caucasus, the former Bishop of Sukhum, Agafodor (1837-1919).
4. Books of birth certificate of the Duripsh church community in 1900-1908.
5. The priest of the Duripsh Church Joel (Nicholay Ladariya). From the private archive of M.Ladariya.
6. The modern appearance of the Duripsh temple. Photos of Archimandrite Dorotheos (Dbar). 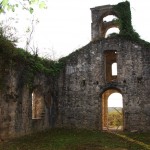 See also in Gallery: The Temple of Archangel Michael in Duripsh [Смотреть]
Share to my friends: