The Official Website of the Holy Metropolis of Abkhazia > Articles > Archimandrite Dorotheos (Dbar). «I do not intend to be engaged in political games and say “όχι”»

Archimandrite Dorotheos (Dbar). «I do not intend to be engaged in political games and say “όχι”» 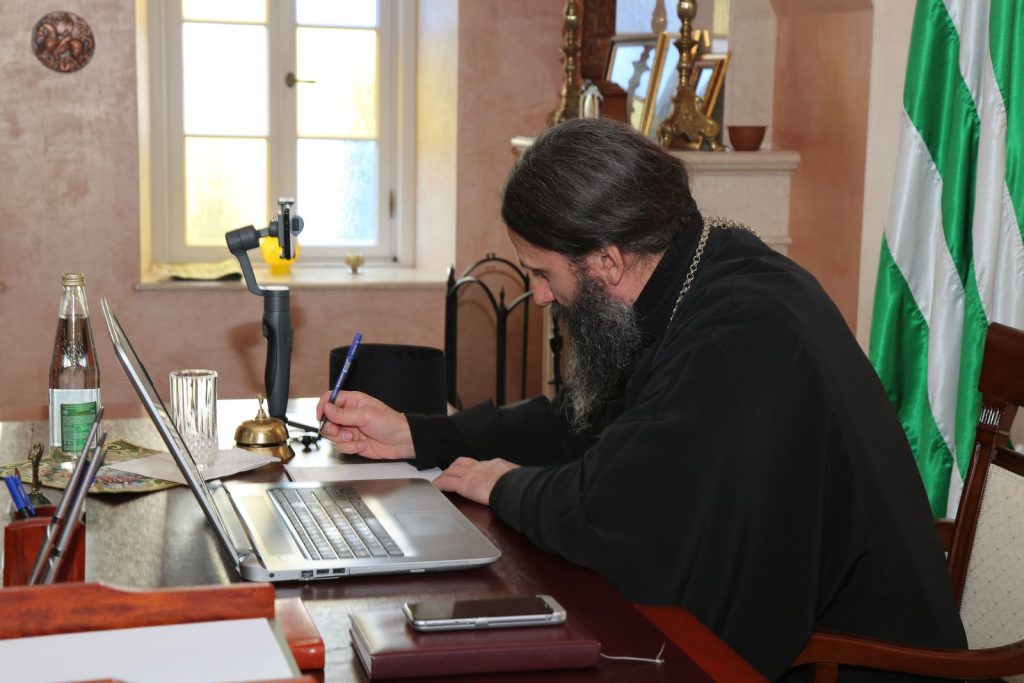 In the past six months, the name of Archimandrite Dorotheos (Dbar) as a possible participant in the upcoming presidential elections in our country has been often mentioned in various media and social networks. But I have never publicly expressed such an intention.
In January 2018, I had a meeting with a group of deputies of the National Assembly in the New Athos Monastery, who tried to convince me to engage in politics and run for office in the elections of the President of Abkhazia in 2019. But I refused.

However, it was precisely this meeting that prompted me to write thoughts about the present situation in Abkhazia and what we, citizens of the country, need to do to change the situation. At first I thought that it would be a small article, but in the process of work the amount of collected materials grew and I have written several articles. At the moment, six major parts of these reflections, perceived by readers with great interest, have already been written and published. I hope soon I will complete this work (it remains to write three more sections), and it will be published in the form of a book.

In the summer of 2018, the same deputies of our first Parliament and a number of other young politicians returned to the conversation about the prospects for my candidacy for the presidency of Abkhazia in 2019. From that moment, in view of my Abkhaz upbringing, Christian convictions, personal respect for elders and respectful perception of their opinions, I have ceased to be so categorical in my refusal.

When, in December 2018, the “Общее дело” (Common business) socio-political movement was created, rumors appeared that it was allegedly being created “under Archimandrite Dorotheos”. However, I did not attend any meetings of this organization and did not participate in the work of the movement and do not accept it. There are reasons why I do not intend to engage in politics with the majority of the participants of this movement. However, I have the same attitude towards any other active political parties, social movements and individual political figures.

In order to engage in politics, to think out and draw up a program of reforms and the future development of Abkhazia, I have enough knowledge, experience, strength and recommendations of my two employees in HMA, online resources available for the transmission of ideas and communication with various representatives of our society.

By the end of 2018, I made a decision: if I stand for the presidential election, I will do it exclusively as an independent candidate. At the same time, I determined a number of necessary and obligatory conditions for fulfillment:

Summarizing what I said, if I participated in the presidential elections of the Republic of Abkhazia in 2019, I would follow the following principles: “Honesty is the best policy” (George Washington), “Fewer words, more deeds” (Emmeline Pankhurst) and “Freedom and power bring responsibility” (Julius Robert Oppenheimer).

In March 2019, I began to notice that people who tried to convince me to take part in the presidential election began to distance. I don’t know why it has happened.

I have never been “ fluffy and obedient”! I always follow my principles and beliefs (even if they are wrong)! And I never played backstage games! Never intrigued! But everyone who tried to convince me to engage in politics knew my personality well.

Recently, I found out that our Parliament seriously intends to discuss the issue of depriving representatives of the Abkhaz diaspora in the elections of the President of Abkhazia. That is, Abkhazians, in fact, permanently residing outside Abkhazia, may lose the right to vote on the elections for the President of Abkhazia. I think this is an insult for our brothers and sisters who live outside Abkhazia, including against their will!

All of the above, as well as my own conviction that was finally formed during the two weeks of Lent, prompted me to take a decision:

I apologize if I led someone into temptation with my publications, speeches and commentaries. I wish all of you Happy Easter!