It should be noted that these dates indicate the beginning and completion of the southern building’s construction with the gate church of the Ascension of the Lord and the church of St. Apostle Andrew.

One can see the original design of the front door in the color photograph of the New Athos Monastery front door, taken by S. M. Prokudin-Gorsky in 1912. In particular, the wall painting with the image of St. Alexander Nevsky is clearly visible on the right side of the main entrance. Obviously, similar paintings were also placed on the left side of the entrance. There was placed the icon of the Blessed Virgin Mary “Vratarnitsa” (Iverskaya) above the entrance arch with a lamp in front of it. On the right of the icon there is a mural depicting the archangel in front of the Virgin. Obviously, the image of the archangel was also placed on the opposite side. A dedication inscription in Church Slavonic is placed under the icon, above the arch of the entrance gate. In the center under the dedication inscription, there is a castle stone of the arch with the date of the beginning and completion of the monastery construction. A fragment of the mural, depicting a cherub and an ornament is visible in the inner part of the entrance dome’s vault. Frescoes on the walls of the vault above the main staircase are also visible in the depth. 000It should be noted that the decorative, plaster, covering of the facade above the central entrance staircase has preserved (however, later it was repainted in terracotta color). The terracotta color of the facade is completely absent in the photograph of Prokudin-Gorsky, on the contrary, all the protruding architectural elements of the facade are white and the walls have a lime-sand hue.

After the closure of the New Athos Monastery in 1924 and the opening of the Psyrtskha boarding house on the basis of the monastery buildings, the main entrance was completely changed: thus, the gate paintings were destroyed, the gate icon of the Blessed Virgin Mary with the dedication inscription was dismantled and lost, original handrail was destroyed, date of construction on the castle stone was plastered. In addition, on the left and right of the porch of the main entrance there were added platforms for shops (during the cleaning of the facade on the left of the porch, an inscription with the following content was discovered: “КАФЭ КОНДИТЕРСКАЯ АБКУРСНАБА” (“CAFÉ CONFECTIONERY ABKURSNABA” – Abkhazian resort supply).

In 2001−2002 when Hieromonk Andrey (Ampar) was the abbot of the New Athos Monastery, the following works were carried out: shops on the left and right of the central entrance’s porch were dismantled, new gates were built.

In 2014, under the guidance of Hierodeacon David (Sarsaniya) – the abbot of the New Athos Monastery, the handrail of the porch of the central entrance was restored. 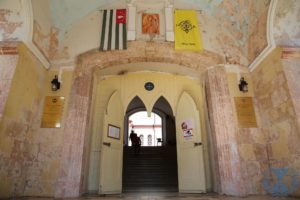 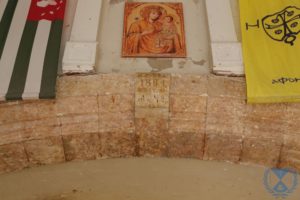 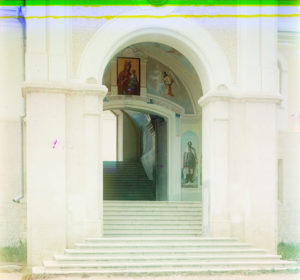 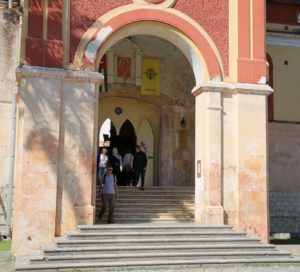 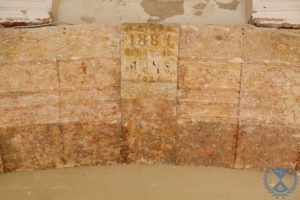 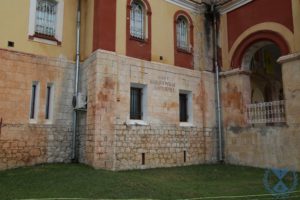 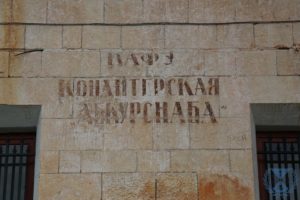