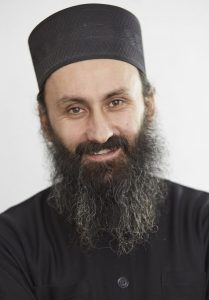 Dmitry Dbar was born on January 18, 1972 in the village of Mgudzirkhua, Gudauta district. In 1988 he finished school №1 in Gudauta, then entered the second course of the Sukhum Art School.

In 1991 after finishing the school he entered the Abkhazian State University at the faculty of art. Finished it as a painter-decorater. In April 9 fr. Dorotheos adopted the Sacrament of Baptizm in the Likhny Temple. In 1993 Dorotheos Dbar entered the Moscow Theological Seminary. After finishing it he entered the Moscow Theological Academy. In 2001 fr.Dorotheos graduated from the Academy with excellent marks and defended PhD Thesis. The theme of his thesis was “History of Christianity in Abkhazia in the first millennium”( his scientific adviser was the professor of Church history A.Sidorov). In August 2001, the head of Sukhum-Abkhazian Eparchy – priest Vissarion Aplia sent a written recommendation to a bishop of Maikop and Adigeya to ordain Dorotheos Dbar to a priesthood.

In August 26, 2001 he was ordained a monk, named Dorotheos by Bishop of Maikop and Adygea – Panteleimon (Kutov) in the St. Michael Monastery (The Republic of Adygea, Russia).

In August 29, 2001 at the Trinity Cathedral in Maikop Dorotheos Dbar was ordained a hierodeacon by the same bishop. On September 9, 2001 he was ordained to the rank of presbyter and awarded the right to wear a nabedrennik.

Ordained by the same Bishop of Maikop and Adygea Panteleimon (Kutov). Dorotheos Dbar opened the monastery of St.John Chrisostom in the village of Kaman (Abkhazia) in 2001.

In the 10th of March, 2002 he got the right to move to another Diosece. Farther Dorotheos was an abbot of the Kaman monastery from 2001 to 2006. In 2001-2002 he was a secretary of the Council of Sukhum-Abkhazian Eparchy.
From 2001 to 2006 served in the following temples of Abkhazia: the Sukhum Cathedral, the temple of Intercession and the temple of Simon the Cananees in New Athos, the Dranda and Mokva Cathedrals, the temple of St.George in the village of Chuburkhinji, the Pitsunda temple and chaple.

Dorotheos Dbar opened the Religious school in New Athos. In 2002 he founded the New Athos Seminary. Fr.Dorotheos was a rector of the Seminary from 2002 to 2006 and also taught the following disciplines: Dogmatic Theology, Patrology, Basic Theology, Pastoral Theology, Homiletics, Canon Law, History of the Abkhazian Church, Sect Studies and History of Religions.

In 2003 he founded the Regent School. Dorotheos Dbar was a cleric of the Abkhazian Eparchy from 2005 to 2007. Since 2007 served as a monk in the monastery of Sts. Raphael, Nicholas and Irene (Paeonia, Greece). Since 2007 Dorotheos Dbar served in the Holy Metropolis of Goumenissa, Aksiupol and Policastro.Then he served in the temple of St. Demetrius of Thessaloniki in Aksiupol(Greece).

Studied Modern Greek in the Higher School of Modern Greek at the Aristotle University of Thessaloniki in 2007-2008.He was admitted to the doctoral program of Aristotle University of Thessaloniki on October 29,2009.
In April 21, 2011 Dorotheos Dbar was ordained to the rank of Archimandrite by Metropolitan of Goumenissa, Aksiupol and Policastro – Demetrius(Bekiaris) in the monastery of Our Holy Mary (Goumenissa,Greece). On May15, 2011 fr.Dorotheos was elected as chairman of the Holy Metropolis of Abkhazia at the Church National Assembly.
On May 26, 2011 because of the convening of the Church National Assembly and the creation of the Holy Metropolis of Abkhazia Dorotheos Dbar was banned to serve for one year by Bishop of Maikop and Adygea-Tikhon.
On June 8, 2012 the ban was extended for three years. Prohibitions were not recognized by bishops of other Orthodox Churches, Archimandrite Dorotheos went on serving in Abkhazia and Greece.

He studied a special course on “Greek paleography, codification and publication of manuscripts” in 2013.
On May 4, 2014 Dorotheos Dbar defended a doctoral thesis successfully at the Aristotle University of Thessaloniki. The theme of his doctoral thesis was “The place of St. John Chrysostom’s death “.

Dorotheos Dbar returned to Abkhazia finally on May, 2014. In June 12, 2015 the ban was again extended for three years by Bishop of Maikop and Adygea Tikhon. Since 2015 he has delivered lectures at the Seminary of the New Athos monastery.Archimandrite Dorotheos is an author of two scientific monographs, several books, more than 150 publicistic artickles. He also translated Liturgical texts from Ancient Greek, Modern Greek, the Slavic language into Abkhazian and Russian. Dorotheos Dbar is a chairman of the Holy Metropolis of Abkhazia. He is the chief editor of the religious and educational magazine “Alasharbaga” and the head of the cultural and educational center “Aduney”.