Church of Intercession of Holy Virgin in New Athos (1876)

On 1876 the monks from Mount Athos (Greece) arrived in Abkhazia. They built a temple in New Athos. It was their first temple in honor of the Intercession of the Holy Virgin. The construction of the temple was over on October 1, 1876. On October 17, 1876 the temple was consecrated. On April 27, 1877 during the Russo-Turkish war the church was burnt . On October 1878 the restoration works were started. The Church of the Intercession of the Holy Virgin was re-consecrated on February 3, 1879.

The church had a chapel (aisle) in honor of St. Archangel Michael. Nowadays a library is located there. Gilded iconostasis with beautiful icons were in the central part of the temple. The miraculous icon of the Holy Virgin was situated in front of the left kliros. It was covered with silver chasuble. This icon was brought from Mount Athos (Greece). There was also the icon of St. Apostle Simon the Zealot and St. Pantaleon. They held the icon of Our Lady. The icon of St. Apostle Simon the Zealot, covered with silver chasuble, was situated in front of the right kliros. All the icons were created in the academic style of that epoch. The holy relics of St. Pantaleon in the marble ark were kept in the wooden gallery.

The monastery garden and tsar-road were located next to the Church of Intercession. The road was called the “Tsar” in honor of Tsar Alexander III. He and his family visited New Athos and the Monastery in 1888.

From 1924 to 1992 the church was the property of the farm “Psyrtsha” and there was a cinema in the building. During that time, the dome and bell tower were destroyed, iconostasis and church utensils were damaged badly. The bell tower and the big clock were dismantled. The clock tower was installed on the building of the central department store of Gudauta. Since that time it has decorated the town of Gudauta. Later, a cinema was opened outside in the east side of the temple. The restoration of the church was started by New Athos organization “Vozrozhdenie”(Revival) in the spring of 1992. On March 1992, the Executive Committee of the City Council made a decision to return the church building to the Orthodox congregation of New Athos. A small church library was opened in the Church of the Intercession of the Holy Virgin. On March 20, 1995 the church community of the temple was registered in the Ministry of Justice of the Republic of Abkhazia. However, due to the lack of the law about religion in the constitution of RA, the registration of the Church Community was canceled. According to the Constitution of the Republic of Abkhazia the Church Community of the Temple of the Intercession didn’t exist. In 2002, according to the order of the head of the New Athos administration Vitaly Smyr, the Church of the Intercession of Holy Virgin became the property of the New Athos monastery.

From 2002 to 2006 the Church of the Intercession of Holy Virgin functioned as a parish church for the inhabitants of New Athos. During that time, there were the divine worship, the sacrament of baptism and wedding constantly. Employee priest was a hieromonk Dorotheos (Dbar).

The Regent school of the Abkhazian Eparchy functioned at the Church of the Intercession of the Holy Virgin.

Since 2006 after a fire in the Town Library of New Athos, the Church building has being used as a library. The church service was temporarily interrupted in the temple from 2011 to 2014. In the fall of 2014, the roof of the church was replaced due to the donations of the New Athos inhabitants and the New Athos Monastery.

Now the Church is in need of serious restoration.

The temple is managed by the Holy Metropolis of Abkhazia.

The Divine worship is held in the temple annually in the feast of the Holy Virgin, October 13-14. 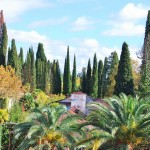 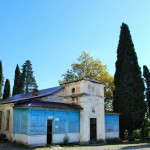 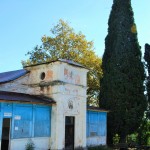 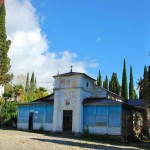 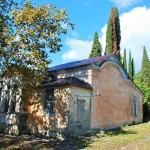 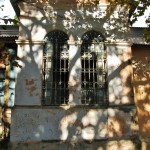 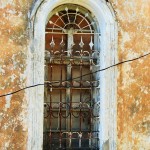 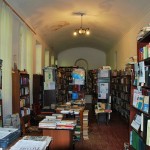