Church of Resurrection of Jesus Christ in Achandara (1869) 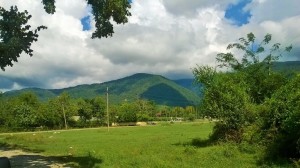 Books of birth certificate dated back to 1909-1914 were certified by protopope Joseph Lakerbay.

All these priests and psalmists of the Achandara Church were from Georgia except Panteleimon Samaa. Probably they came to the Abkhaz village on behalf of the Georgian Diocesan Council.

The Sukhum Eparchy was a part of the Georgian Eparchy.

Thus, the priest of the Achandara church was Dimitry Khocholava from 1892 to 1899.

The priest of the Duripsh parish temporarily served and committed the Sacrament of Baptizm.

Simon Nodya was the priest of the Achandara Church in 1901 and served in the church untill 1905.

The Church had no priest from 1906 to 1907. During that time the Sacrament of Batizm was not committed at all. There was no notes in the Books of Birth Certificate dated back to 1906-1907.

In 1908 the abbot of the Achandara church became Panteleimon Samaa. He was Abkhaz, from the village of Achandara. He served untill the closure of the church in the Soviet period.

Bishop Seraphim who served in the Sukhum Cathedral from 1905 to 1906, attended the Achandara Church in 1905.

Then he became the Leningrad Metropolitan. Bishop Seraphim was canonised as Martyr by the decision of The Russian Orthodox Church.

The Memorial Day of Bishop Seraphim is commemorated on November 28.

Bishop Seraphim found the Achandara church in a poor condition. It looked like a wooden barn. The church was dark because there was almost no windows.

Instead of iconostasis there was a rude plank and instead of icons there were pictures of Jesus Christ, Holy Virgin and Saint George on the plank.

In front of the icons there were two thick wooden stumps instead of candlesticks. The throne and the altar were not covered.

Since 1908 priest Panteleimon Samaa strated to serve in the Achandara church.

On May 11, 1912, he participated in the First Meeting of the Sukhum Eparchy clergy. It was held in the town of Gudauta.

At the meeting the questions of ruined church restorations in the villages of Achandara, Otkhara, Dzhirhva and others were discussed.

They spoke about the need of building committees in all parishes.

At the Meeting Bishop Andrey asked Bondarenko and priest Panteleimon will take care and provide possible assistance in the construction of the chapel in the village Aatsy using the remaining forest from Achandarskogo temple.

At the meeting Bishop Andrey asked priest I. Bondarenko and priest Panteleimon Samaa to help in the building of chapel in the village of Aatsy.

Thus, the wooden church of the Resurrection in Achandara was updated in 1912. Priest P.Samaa was present at the feast.

According to the inhabitant of the village Achandara-Timur Akhba, after the establishment of Soviet Authority in Abkhazia, the Achandara church was converted into an office. Later it was completely destroyed.

The bell of the church was used for the needs of Achandara’s school. During the Second World War it was given for the melt.

After the tragic death of P.Samaa’s grandson (1982) the widow of his grandson Ludmila Psardya gave all the icons, church utensils and books of the priest to the church of the Intercession of Holy Virgin in the town of Gudauta. She gave them to a priest named Leonty Zhvania.

Some religious and personal things of the priest P. Samaa (the Altar Gospel, photos, etc.) were handed over to the priest Vissarion Aplia (1995).

The author of the article is Doctor of Divinity, Archimandrite Dorotheos (Dbar).