…Condemnation is a demonic state. The devil was the first one who fell into this sin. The devil condemned and slandered God before the ancestors, then he began to teach people to condemn.

The Holy Metropolis of Abkhazia has been going through trying times, since the day of its foundation at the Church and People’s Assembly on 15 May 2011. Unfortunately, since the very beginning of its existence, the Church has experienced persecution, both external and internal ones. However, temptation or persecution are not so important, when a Christian lives in persecution, adversity and misery, the important thing for him is his inner state.

If the Christian concept is based on Christ Himself and His teachings, then this is the path to perfection. If it is directed to itself and passions, then it’s a way to perdition.

When it comes to Orthodox organizations in Abkhazia (we intentionally do not say “Church”), everyone is faced with a choice.

On the one hand, no one bothers to elect a church community, a confessor, a church and follow the gospel commandments. On the other hand, there is a great temptation to plunge into “inter-Orthodox” disputes, draw energy in the confrontation and feeling like a fighter against the “world evil”.

Unfortunately, the Holy Metropolis of Abkhazia is the only organization in Abkhazia, that is able to prevent the tragic consequences of the “struggle” between our people. As an example, I would like to tell about the fate of a clergyman in Abkhazia.

Archpriest Alexander Yablokov arrived in our country in 2007-2008, presented the documents of the clergyman of the Russian Orthodox Church MP. Later he entered the clergy of the Sukhum-Abkhazian diocese, then the Abkhaz Orthodox Church. He is an active and energetic person and the leader of AOC Priest Vissarion soon appointed him as an abbot of the Church of St. Hypatius in the city of Gagra. During the period of tense confrontation among the clergy of Abkhazia, Archpriest Alexander Yablokov used to state about the “purity of Orthodoxy” against the “schismatics”. He helped to create the official web-page of the AOC and was appointed as the managing director of the AOC.

The activity of Archpriest Alexander embodied various aspects of his creative abilities.

In the official web-page of the AOC one can still read the descriptions of his ministry in details and everyone can get acquainted with them.

The priest took part in the public

and political life of our country.

He was also involved in issues of spiritual care and security.

The archpriest did not forget about the important dates for our society:

He was always involved in the Christian life of the Abkhazian Orthodox Church. 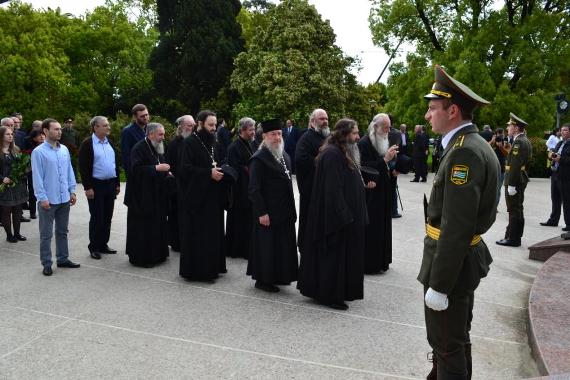 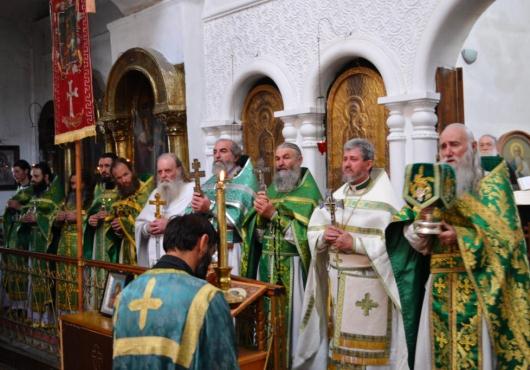 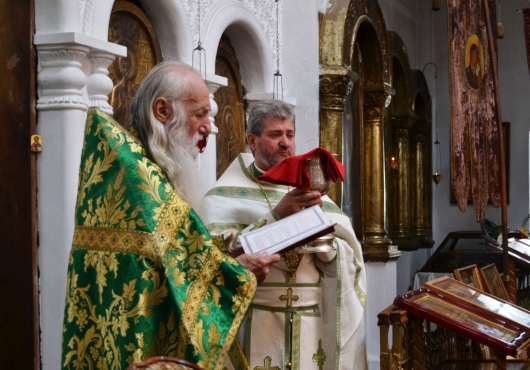 The managing director was obedient, helped in the formation of the Church.

But there was an inner side of his ministry. The clergy of Abkhazia and the clergy of the AOC knew about it.

However, we are not going to judge anyone. We don’t have a task of mocking at our “spiritual” opponents or people who do not share our point of view.

We just draw the attention of the flock to a document. The content of this document has not been hidden since the very beginning of the ministry of Archpriest Alexander Yablokov in Abkhazia.

To His Holiness
the Patriarch of Moscow and All Russia KIRILL

My appeal to you is connected with Archpriest Alexander Yablokov, a possible bishop of the Penza Diocese. My concern is due to circumstances, which will be discussed below.

Archpriest Alexander Yablokov was ordained as a priest by me in 1987 and served in various parishes of the Krasnodar Diocese until 1996. In 1996 he was banned by me and dismissed because of his immoral lifestyle. In particular, he openly cohabited with Elizabeth Georgievna Dyachkova, a parishioner of St. Catherine’s Cathedral. For several years, he sent his wife and children to resorts and at that time he cohabited with E. G. Dyachkova in his house.

Archpriest Alexander spent many nights in the house of E. G. Dyachkova, explaining to his naive wife that in the early morning he would have a service at the cathedral and for the night he would stay at his friends near the church. His wife was a very religious woman and they had four young children. For many years Archpriest Alexander was beating his wife and children. Many people regularly complained to me about the misbehavior of the priest Alexander Yablokov, he dishonored and discredited the Church.Archpriest Alexander often ridiculed monasticism, did not observe church fasting, laughed at the piety of his wife, in particular, when she read the Psalms alone. I repeatedly had to ask a negligent priest to restore peace and harmony in his family and reconsider his attitude to marriage. But he did not hear me and continued his immoral lifestyle. The wife filed for divorce and the court decided to dissolve a marriage and oblige Archpriest Alexander Yablokov to recover maintenance for four children.
However, Archpriest Alexander Yablokov refused to maintain his children and a criminal case was instituted against him: only by a lucky chance he escaped from criminal liability.

I saw that he didn’t repent and wasn’t going to return to the canons of Christianity, so I forbade him in the ministry and dismissed him.

In addition, I would like to draw your attention, Your Holiness, to the fact that Archpriest Alexander Yablokov sold to the pawnshop the altar gospel and the Cross, totaling about 600 thousand rubles, donated by D.V. Novikov to the Holy Transfiguration Church in Sochi.

I have found out recently that N. A. Semenova, a famous Sochi philanthropist, donated an apartment totaling 500.000$ to the church. Archpriest Alexander sold the apartment and the money spent on the construction of his five-hundred-meter house. In addition, he continues to cohabit with E. G. Dyachkova, she used to say that she is his mother. This “mother” actually led the parish, church employees and the clergy. Father Alexander convinced many parishioners that many bishops and priests lived like that. During his ministry in Sochi, he asked 100 thousand US dollars from D.V. Novikov for getting the title of bishop by him, it was incredible for me.

I had intentions to bring Archpriest Alexander Yablokov before the church court, but in July he asked me to dismiss him from the staff. I satisfied his request.

I would like to tell about the parish Archpriest Alexander Yablokov left. First of all, people in the parish were aggressive and hostile to the new abbot.

In order to normalize the situation, I had to send my referent, priest Ilya Bystrov, to the parish, because I’m convinced that parishioners would complain of another priest. Everyone knows that priest Ilya Bystrov is my assistant and I am informed of his every step.

In November, I attended this parish, held the Divine Liturgy. I saw the poor outcomes of service of the former abbot and what the new abbot had to do. All valuable utensils were taken by the former abbot; he thinks everything is his property.

Archpriest Alexander has served in the Penza Diocese since November, but regularly goes to Sochi, held different Sacraments in his home. He tried to oppose parishioners to the ruling bishop and clergy. On the feast of the Epiphany, his cohabitant E. G. Dyachkova visited the Holy Transfiguration Church and informed fans of Archpriest Alexander Yablokov that in March the priest would become a bishop, it had already been decided!

Your Holiness! I suppose if you read his personal file, there will not be much information that characterize Archpriest Alexander Yablokov, but photocopies of these documents are preserved in the office of the Yekaterinodar Diocese. There are reprimands, complaints and the Decree on his prohibition for immoral behavior and other things.
I am sincerely convinced that such a priest cannot be the bishop of the Russian Orthodox Church, moreover he must be brought before the church court.

Humble novice and pilgrim
Your Holiness
METROPOLITAN OF YEKATERINODAR AND KUBAN»»

This document draws attention to the events which led to the following result.

Archpriest Alexander, a former manager of the affairs of the AOC, left the ROC MP and moved to the “Orthodox Russian Church” (“North Russian Diocese”), headed by “Metropolitan” Filaret Semovskykh.

Having become the “archimandrite” of this religious organization, he declared:

“… These and other negative aspects of the patriarchal life became the reason why I left the MP and began to search for the blessed canonical Russian Orthodox Church. The result of my searches was sergianism and ecumenism and I moved to the bosom of Metropolitan Filaret (Semovskikh), First Hierarch of the “ROC”. According to the Decree N 362 of 1920, the Orthodox Russian Church, under the omophorion of Metropolitan Filaret, has legal succession of church authority from His Holiness Patriarch Tikhon and the Holy Synod. The MP (Moscow Patriarchate) is the autocratic schismatic formation of Metropolitan Sergius. Nowadays, there is a possibility to choose a Church and I have made my choice. I dare to comfort everyone who knows me and all the parishioners who are in the canonical Church, not in schism or in a heretical organization. I appeal to everyone to make every effort to find the truth”.

He became the “bishop” of “Sochi and Black Sea Diocese”, including the territory of Abkhazia.

The new “bishop” took part in the “bishop synod”.

The clergy of Abkhazian Orthodox Church constantly accuses HMA of splitting the flock in Abkhazia, sends petitions concerning the clergy of HMA to the Moscow Patriarchate. We are not going to judge them.

Every layman and clergyman in Abkhazia must draw conclusions by himself.

Our duty was to get acquainted our flock with this matter and we have done it.

This is our reality and we continue to call everyone for spiritual vigilance, think of one’s own deeds, sins and the church path one choses.

I hope, the Merciful Lord bless us and defend us from the evil of condemning our brother.