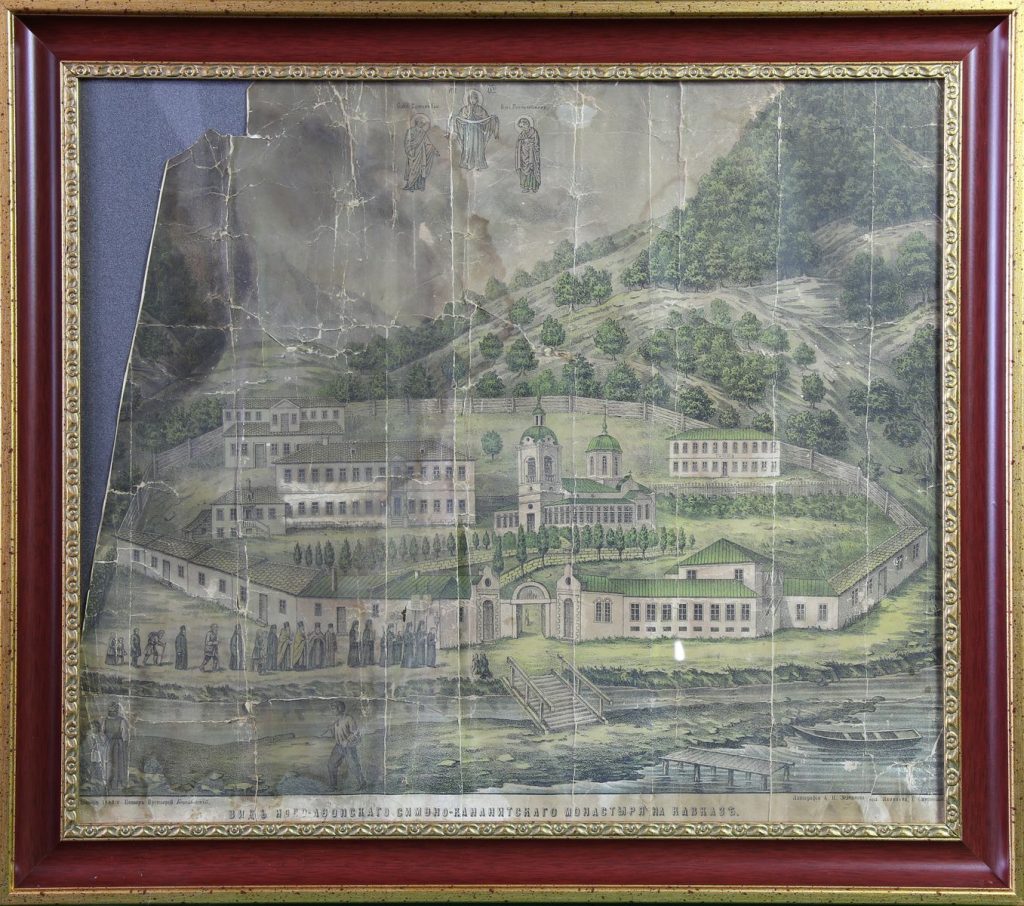 Description: This lithography depicts the buildings of the oldest seaside part of the monastery. In the center of the picture there is the first church built by the monks in honor of the Intercession of the Holy Virgin, 1876. To the right of the church it is depicted the 1st school for Abkhaz boys, the fraternal wing of the monastery with outbuildings is located on the left. The refectory, which has survived, adjoins the fraternal wing of the monastery. One-story farm buildings with a central arched entrance (partially preserved) are located on the south side of the monastery territory. The western, northern and eastern sides of the monastery’s territory are fenced with a wooden fence. The mount that the New Athos monastery is located on, is presented in its original form. Above the entire picture there are images of Theotokos, St. Panteleimon and Simon the Canaanite, the sacred patrons of the New Athos monastery. 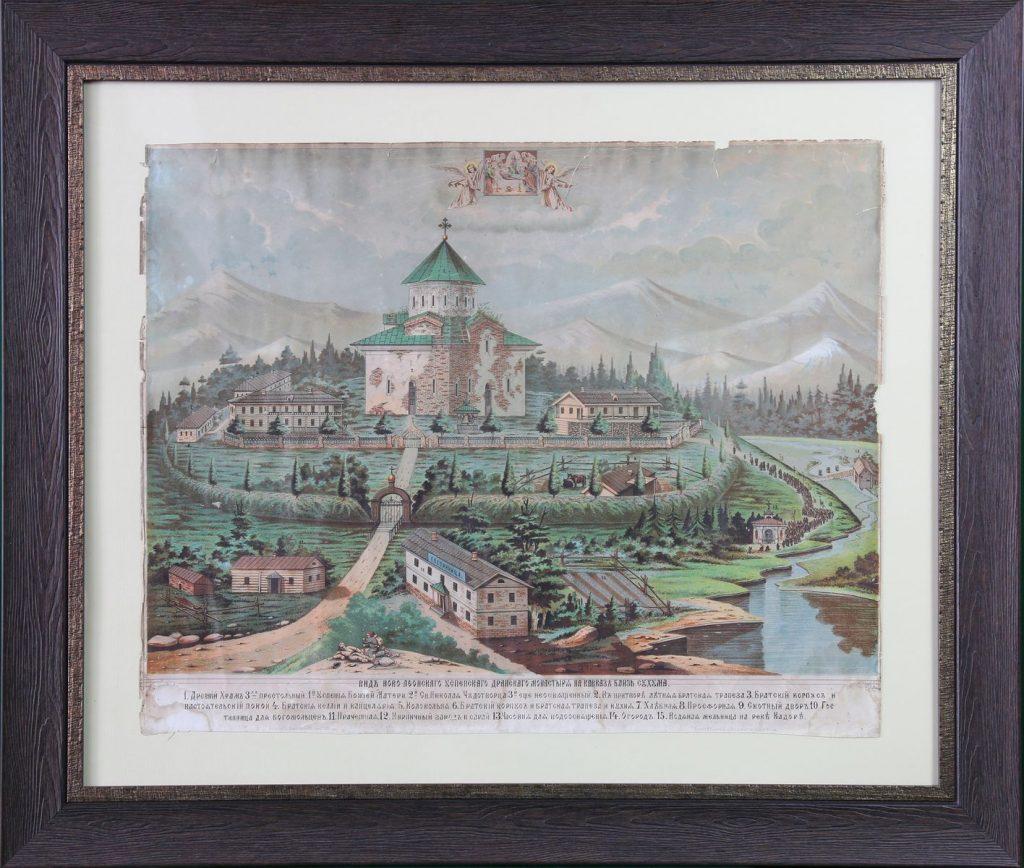 It was acquired in the antique shop “Vanilla” in Sukhum, January 2017.

This lithography is the only one where the Dranda monastery was also named the New Athos monastery, because this monastery was renewed in 1881 on the territory of Abkhazia by monks who had arrived from the Holy Mountain Athos (modern Greece).

Description: In the center of the picture there is the restored ancient Dranda temple of the 6th century and monastic buildings of 1885. There are images of two angels above the whole picture, holding the icon of the Dormition of the Virgin Mary in their hands.

All the objects in this lithography are numbered and a legend is attached to them at the bottom of the lithography: 1. Ancient temple, with three altar: the first altar named in honor of the Dormition of the Mother of God; the second one in honor of Saint Nicholas the Wonderworker; the third one has not consecrated yet. 2. A summer fraternal refectory. 3. A fraternal building and an abbot’s cell. 4. A fraternal cell and a chancery. 5. A bell tower. 6. A fraternal building, a fraternal refectory and a kitchen. 7. A bakery. 8. An animal farm. 10. A hotel for pilgrims. 11. A laundry. 12. A brick factory and a shed. 13. A chapel for water consecration. 14. A garden 15. A water mill on the Kodor River. 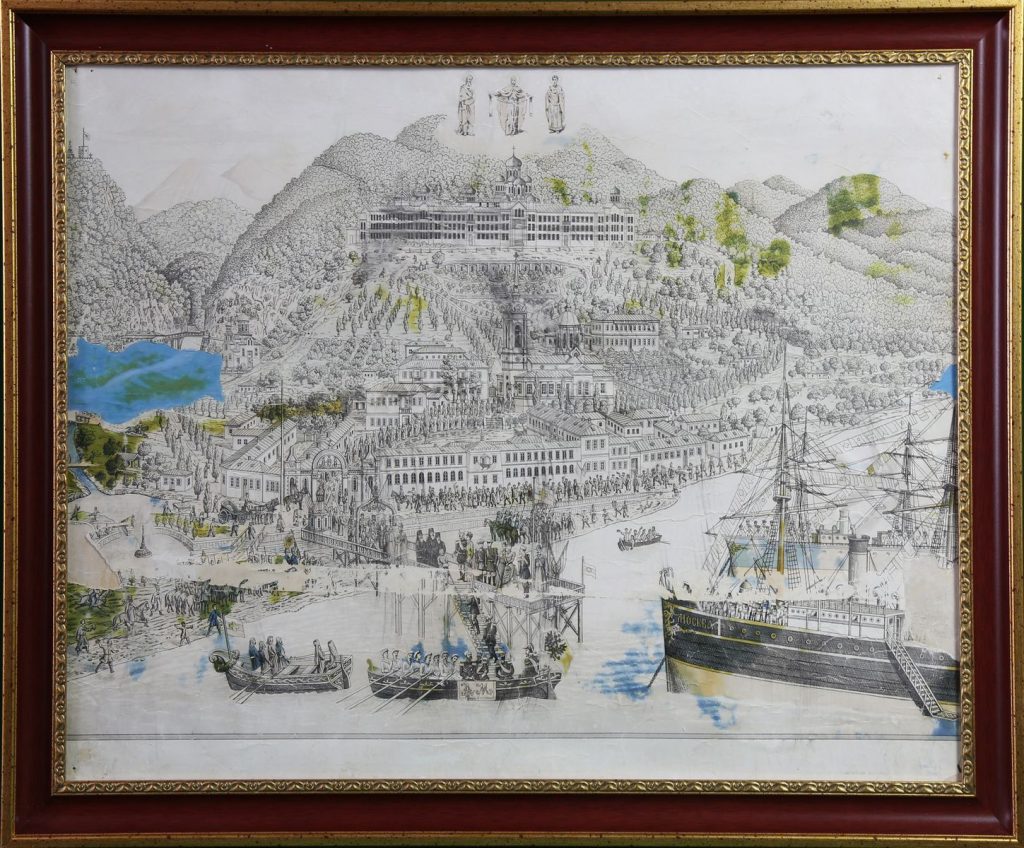 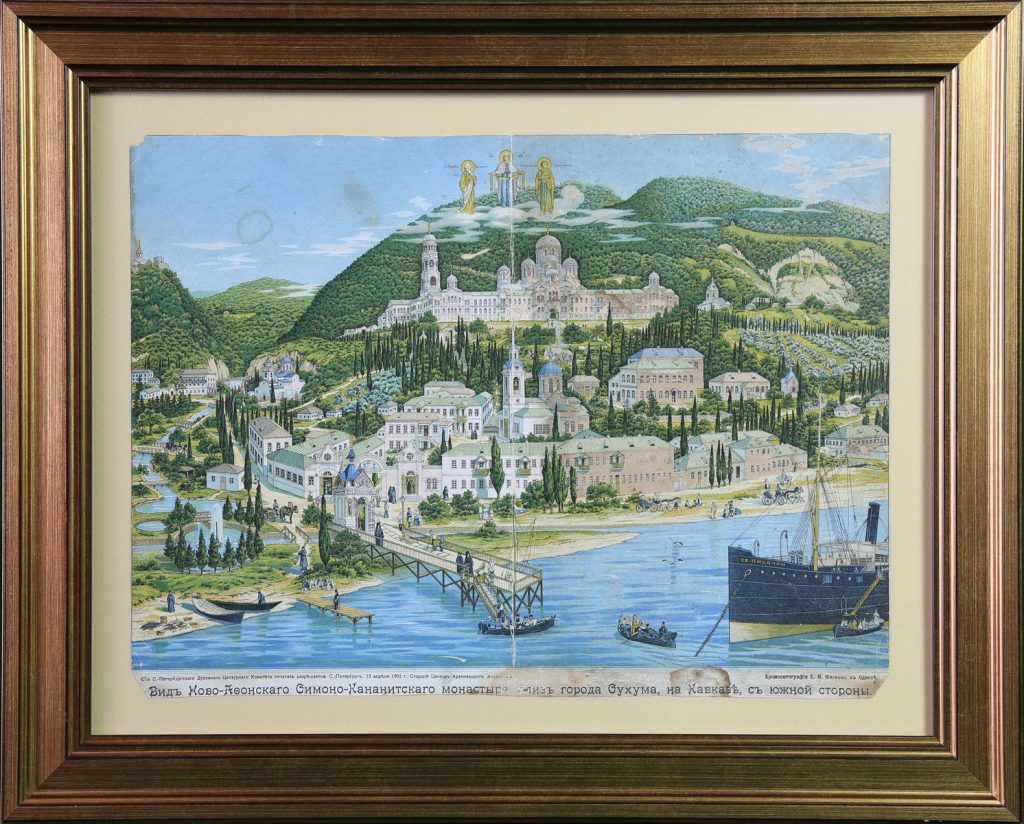 Description: All of the churches of the New Athos monastery, farm buildings and chapels are visible in the lithography. The lithography also depicts the church, located (currently ruined) near the eastern part of the mountain building (now the territory of the state dacha) and a small chapel on the mountain (now the Orlinoye Gnezdo street).

On the right and left sides above the whole picture there are images of the Virgin Mary, St. Panteleimon and St. Simon the Canaanite, patrons of the New Athos monastery. 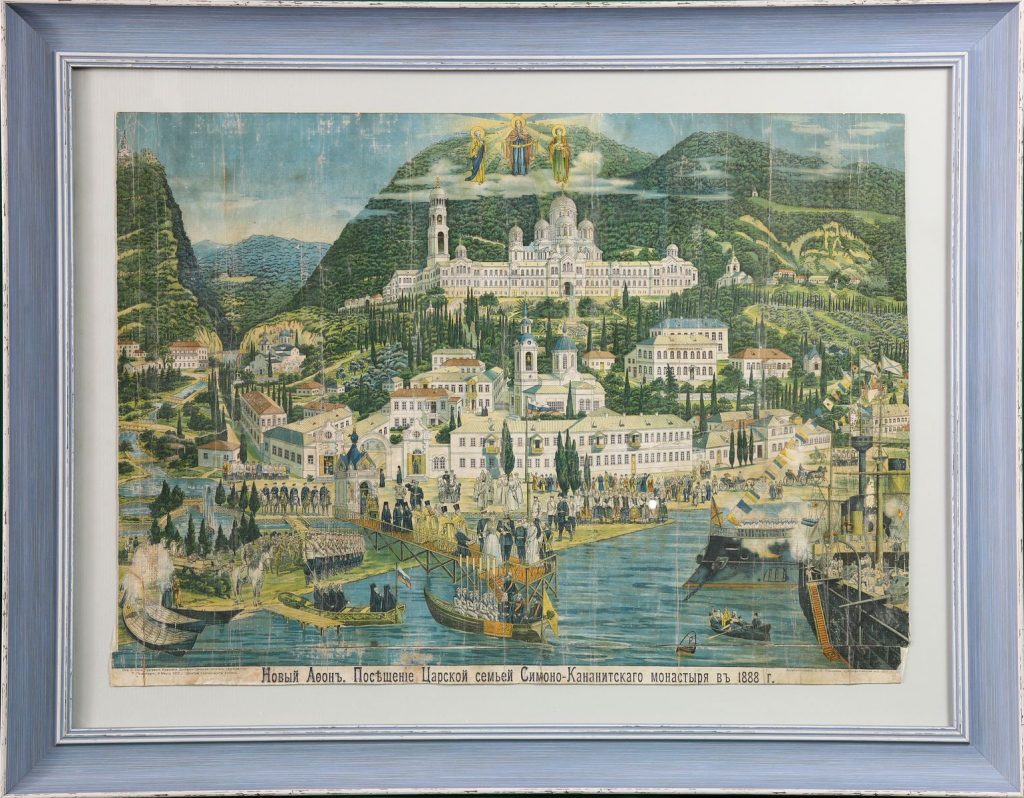 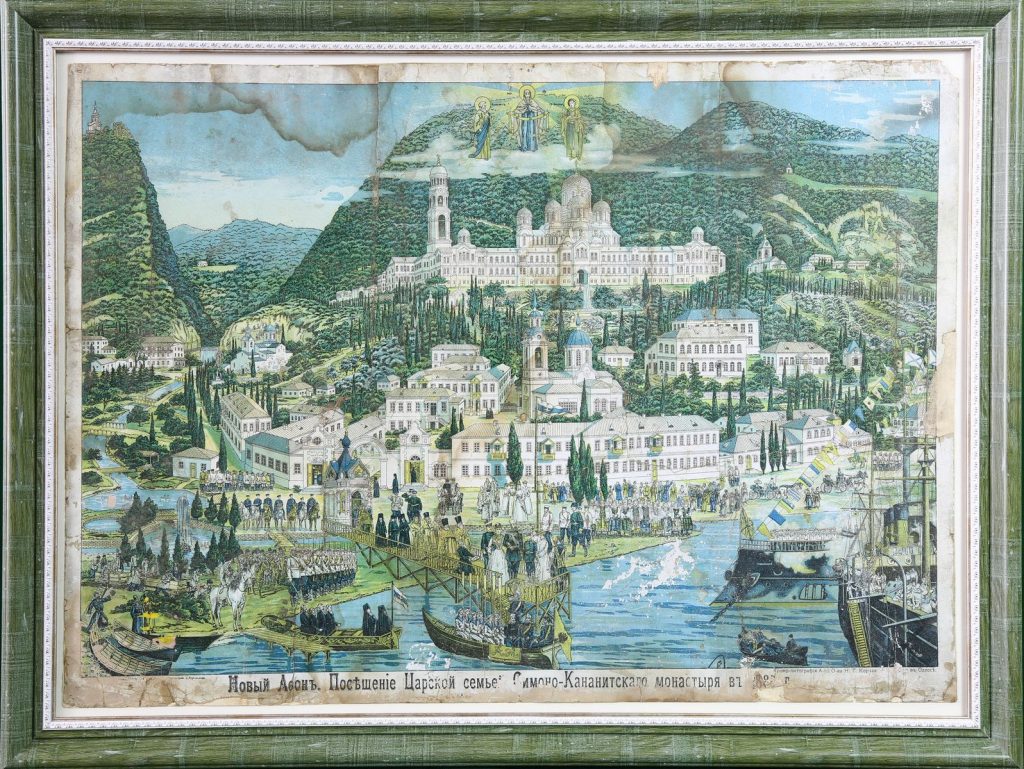 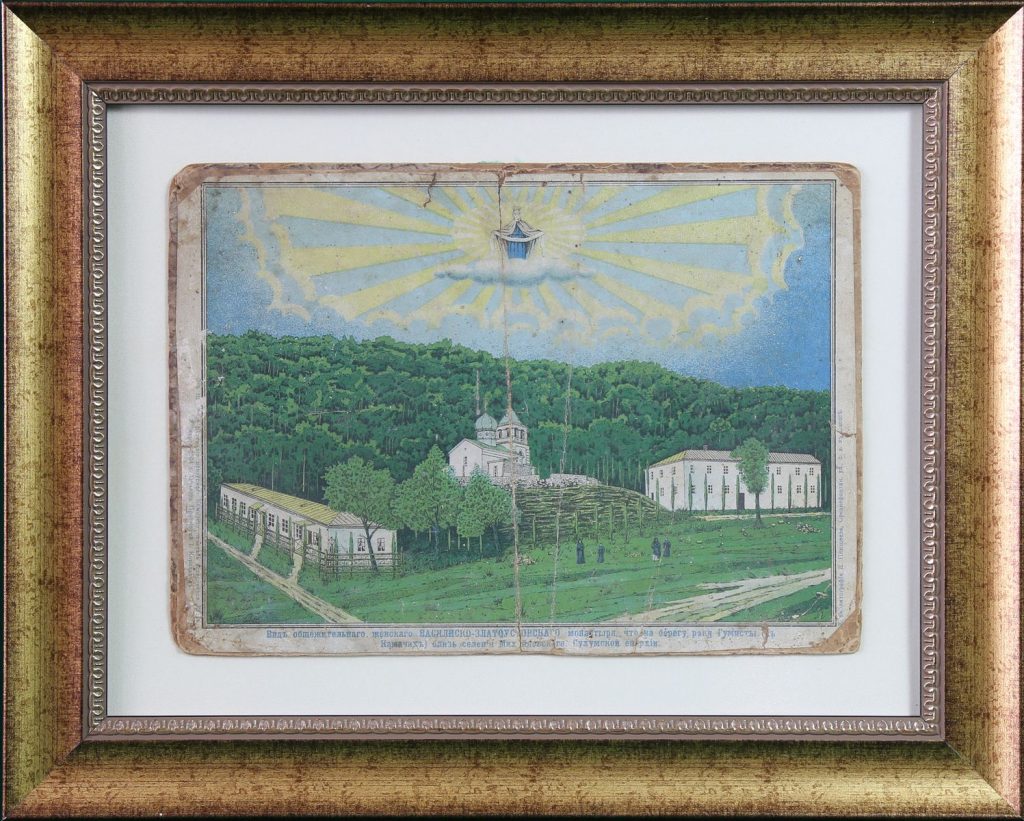 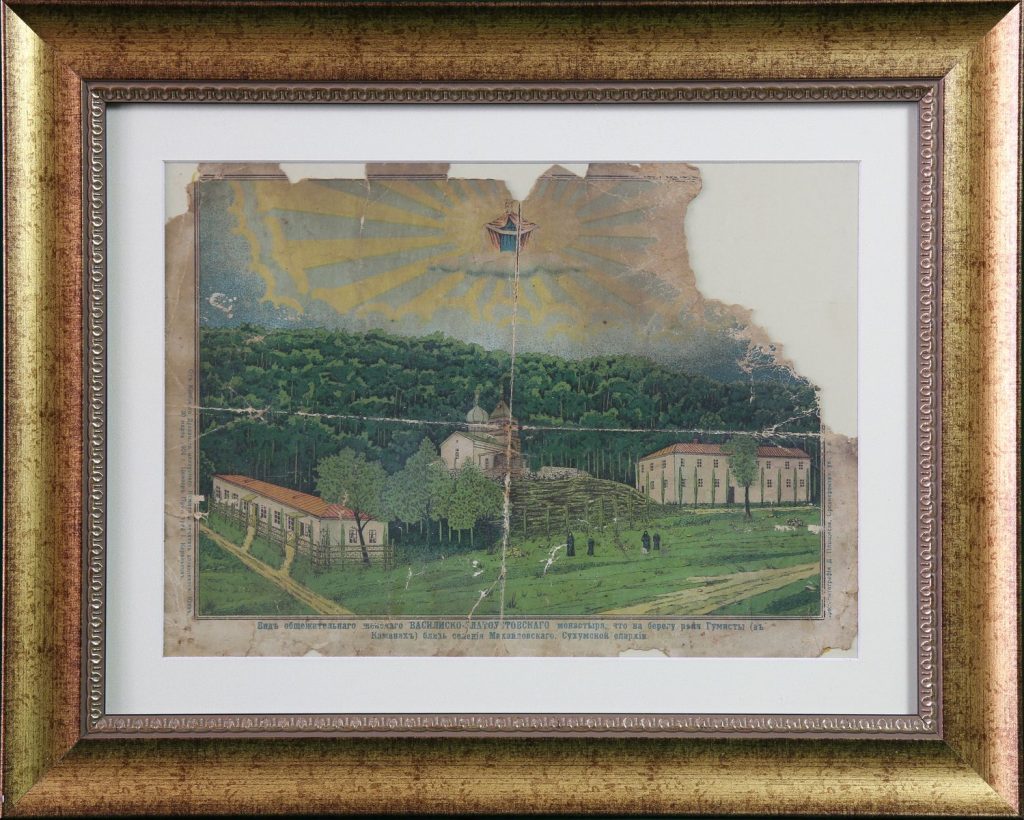 Description made by Archimandrite Dorotheos (Dbar)