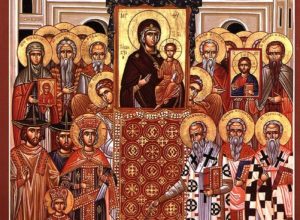 The Feast of Orthodoxy is celebrated on the first Sunday of Great Lent. We celebrate the event of the final affirmation of the veneration of holy icons in the Christian Church. The Feast is kept in memory of the final defeat of iconoclasm and the restoration of icons in Christianity.

In 8 – 9 centuries iconoclasts troubled the Church. A whole movement of people of the Orthodox faith, led by several emperors, demanded to remove icons, murals and sculptures from Christian churches. They believed that worshiping the images of saints was idolatry. Defenders of the veneration of icons said they didn’t worship the objects the saints were depicted on, but through worshiping the images of saints on the icons, they appealed to the prototypes, i.e. to the saints. The worship of icons is not only a tribute to the saints depicted on them, but it is also the way of getting the grace and energy of God. The topic of veneration of icons is not simple …

The iconoclasm will happen again, when the Protestants again remove the icons and murals from the Christian churches of many European countries.

Iconoclasm also destroyed remains of saints and other things, as inadmissible objects of worship for Christians. May be such an attitude to the icons was provoked by the following fact: some people worship various objects that belonged to saints during their life.

Nowadays such things take place in the Christian life. For example, one can see a sofa in the Orthodox church, which belonged to St. John, Metropolitan of Shanghai or the pilgrims in the Diveyevo monastery offer parishioners to bow and kiss the hoe of St. Seraphim of Sarov.

In 2007, in Greece when I arrived in the monastery of Saints Raphael, Nicholas and Irina, Metropolitan Dimitri took me to the city of Policastro on the day of the Feast of Orthodoxy. After the Divine Liturgy, all the clergy, led by the Metropolitan, left the church with icons for the Litany. The procession was led by a concert band (which is an integral part of all church processions in Greece), the clergy was accompanied by soldiers with guns. That was my first participation in the procession in the Orthodox Hellas and it made a great impression on me. I remember that day for another reason as well. On that day of the Feast of Orthodoxy, after six years being a priest, I took part in the bishop’s service for the first time. In the church of Policastro Metropolitan Dimitri served together with Metropolitan Panteleimon of Andinoi (Patriarchate of Alexandria), who was a long time missionary in Africa. I must say that I was struck by the simplicity and accessibility of these bishops. They served, like most Greek metropolitans, without the “army” of deacons, didn’t wear any solemn vestment. One more interesting detail: all Greek bishops (metropolitans and bishops) stand during all services, except for the moments when they should perform the Eucharist (Liturgy). Moreover, the bishop’s throne does not stand in the middle of the church, as we used to see, but on the side. Bishops in the Greek Orthodox Church are elected and serve for life or until they retire. To change a bishop is impossible except for some special cases. The things which happen in the dioceses of the Russian Orthodox Church in this regard is an unacceptable thing and contrary to the canons of the Church. For example, for 20 years of the existence of the Maykop and Adygeya Diocese of the Russian Orthodox Church, the bishop changed four times there.

Let’s return to the theme of icons and frescoes. In 2012, one of the Greek newspapers «Η ΚΑΘΗΜΕΡΙΝΗ» republished a collection of books (24 volumes) in Greek, entitled “Museums of the World”. Each volume was published weekly. Buying these books at newsstands and looking at wonderful illustrations of exhibits and paintings from various museums in the world, I wondered: what a huge difference there is between the religious art of the Christian West and Orthodox Byzantium! The more I looked at the gospel stories and faces of Christian saints, painted by Western artists, the more indignant I felt in my soul: how was it possible to portray them like that? But I cannot say the same thing about paintings on secular topics that were presented in the above collection. I really got aesthetic pleasure from them. For example, I got a great aesthetic pleasure, looking at the “Portrait of a Young Man” (1508, Vienna Museum of the History of Art), painted by the artist Lorenzo Lotto and “Etude of the Female Image” (1489–1502, Amvrosivskaya Art Gallery, Milan), artist Giovanni Antonio Boltrafio.

When artists from countries with traditional Orthodox culture tried to imitate Western artists, they did something terrible. In my opinion, most of the giant paintings of the Russian Museum in St. Petersburg, are vivid evidence of this. If I’m not mistaken, when Henri Matisse saw the newly opened murals of the Assumption Cathedral of the Kremlin, said: “What are Russian artists looking for in the West?”

Probably, the talents given by the Lord to the artists of the West and East have completely different purposes …

I like “impressionism” in art movement (from the French. – impression, feeling). When you look at the picture of Vincent Van Gogh’s “After the Rain” you feel freshness of the atmosphere, don’t you? My favorite artist is Paul Cezanne. I saw his canvases in the Hermitage. Several times I attended Pushkin Museum in Moscow to see the works of the Impressionists. To be honest when I saw them for the first time, I even shed a tear.

When I was 19, I tried to paint something in the style of impressionism. Some of these pictures, as my mother says with irony, “masterpieces” are on the walls of my father’s house in my native village.

The Feast of Orthodoxy! How do we determine that a man is indeed an Orthodox Christian? How do we understand that we are Orthodox?

Frequently Orthodox people think that their “Orthodoxness” and difference from other Christians, for example, Catholics, expresses in external features and rites.

Our Orthodox Christianity should not be determined by external features and rites, the main thing is our comprehension of the Orthodox faith, does it correspond to the “Creed”?

A creed is a statement of the shared beliefs of the Orthodox faith in the form of a fixed formula summarizing core tenets, adopted at the first two Ecumenical Councils: Nicene, in 325, and Constantinople, in 381. By the way, the Bishop from Abkhazia, Saint Stratophil of Pitiunt (Pitsunda), also took part in the First Ecumenical Council.

Once, during my sermon in the church of St. Apostle Andrew in the New Athos monastery, one parishioner asked me: “Father, why did you cancel the singing of the “Creed” in our church?” I said: “You know, “Creed” is not a prayer or a church hymn to sing it. This is a kind of “constitution” of the Church, which cannot be amended or supplemented. Tell me, can a state’s constitution be sung like a national anthem?” the woman understood everything.

The Orthodox Christian must know and understand the content of the “Creed”. When people come to the church to be baptized, to be godmother or to get married, they must know the “Creed”, i.e. being Orthodox Christian means to know what you believe in. Participation in the Sacrament of Confession primarily means the practice of faith, i.e. you repent of not following the “Creed” from time to time. At the Divine Liturgy, in the end of worship, we all together utter the “Creed” loudly, thereby testifying our faith in the “Creed”.

The Armenian, Coptic, Syriac Orthodox churches are outside of canonical communion with the Orthodox (Catholic) Church because they do not accept the canons of the “Creed”, regarding understanding of the Holy Spirit. When many people confess their sins, they don’t understand that they commit a worse sin if they don’t follow the “Creed”. A person cannot take part in the Sacraments of the Church, Baptism, Matrimony, Communion, if he does not believe in the Holy Trinity, if he does not believe in Christ as God, who came to the earth for our salvation.

This is a great sin and it is incomparable with confession that you condemn everyone, constantly lie, sleep a lot, do nothing or you surf the Internet from morning till night i.e. …

The famous writer Clive Lewis said: “If a person who has adopted the doctrine of Christianity doesn’t follow the canons of Christianity, it is more correct to call him a bad Christian than to say he is not a Christian.”

Many of us do not only accept the doctrine of the Orthodox faith, but do not even know it at all. So can we call ourselves in this case, even bad, but Orthodox Christians?

According to the teachings of the Holy Fathers of the Church, the most important virtue in Christianity is judiciousness. That is, a Christian must do everything consciously. Strict fasting without its understanding can lead to mental disorder.

Faith without a clear understanding of what you believe in can lead you to seek communication with the inhabitants of other planets in order to gain “spiritual” experience from them.

In order to avoid such deviations and to be a true Orthodox, first of all you need to remember the text of the “Creed”. The text is given below in the Abkhazian and English languages.