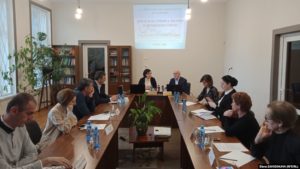 In the Abkhazian Center for Social and Economic Research there was discussed the topic on the crisis that arose in connection with the epidemic of coronavirus and the possible consequences for Abkhazia. The discussion was started by Moscow experts, they told about the conspiracy theory and the collapse of the capitalist system.

The meeting began by watching small fragments of a video recording of the speeches of two Moscow experts, employees of the Center for Social and Economic Research suggested to the meeting participants to discuss the opinion of these experts. They called the pandemic “World War III,” but they explained its causes in different ways. They are not virologists, but they claim that the virus was created artificially to achieve certain goals.

Elena Veduta, the head of the “Artificial Intelligence in Economics” section of the Scientific Council on the Methodology of Artificial Intelligence and Cognitive Research under the Presidium of the Russian Academy of Sciences, says that wealthy families are waging a world war against humanity, their task is to break the existing financial system. “Dollars no longer work, they can no longer be printed, but it is impossible to break the financial system by military means, so they are breaking it down with the help of a pandemic that these families launched. Big players need to self-isolate everyone and try to prepare digital control quickly so when all the hungry people leave their home, they will be under the total control,” she says.

The second specialist, Marina Alpidovskaya, professor of the Department of Economic Theory of the Financial University under the Government of the Russian Federation, explains that the world is facing a crisis in the capitalist economic system, which can only develop through expansion, capturing new sales markets. The capitalist system ceased to exist because there are no new markets. According to Alpidovskaya any capitalist crisis in the twentieth century was resolved, through the participation of countries in wars. “Are the owners of money and the leaders of this system ready to wage a global war against all humans for complete destruction?” She asks. And she answers by herself: “Apparently they are not ready, so they had to come up with something that would ultimately fulfill the function of a world war, which would reset the world economy.”

Alisa Matua, the head of the laboratory of immunology and virology of the Abkhazian Institute of experimental pathology and therapy believes that it is too early to draw any conclusions and predictions now. The virus and its effect on the human body are not fully understood. Now in Abkhazia there is a calm epidemiological situation, but the situation can change in future. She urged everyone to be careful and follow the recommendations. She called the closed border and control over those who cross it the most important factor of stability. The problem is that not always there is control over those who come to Abkhazia from neighboring countries, where there are many infected people. A proponent of vaccination, Matua says that the most successful way out of the pandemic would be to create a vaccine and achieve collective immunity. She cannot be sure to say that the virus has an artificial origin, because the scientific community has not decided on this issue yet.

Sociologist Dmitry Adleiba says that he is not a supporter of conspiracy theories and does not doubt that the coronavirus has got a natural origin. He considers scientists should talk about the situation with the virus: how dangerous it is and what way it spreads. There is an opinion that collective immunity without a vaccine should be developed and this will happen naturally. Problems of ecology, global warming can be its causes, there are many opinions. And the situation today is due to the measures that have been taken by governments of different countries, on the one hand, to control the situation, on the other hand, it is global politics, and everyone has a great temptation to solve a huge number of issues accumulated before the pandemic. And thanks to the current situation, they can be resolved, from my point of view and from the point of view of many other sociologists.”

According to Adleiba, in terms of economic consequences and the involvement of different countries, a pandemic can be compared with World War II. According to experts, for six years of the war, the total damage to the world economy amounted to 1.8 trillion US dollars, and the damage for half a year of a pandemic is already estimated by various specialists at 1 trillion US dollars.

People who are isolated and subjected to a massive impact of information flows, which all information evaluate differently because of their education and development, have serious psychological problems. Many people behave inadequately and this problem should also be solved. In general, the sociologist is not a pessimist and hopes that humanity will cope with the coronavirus by vaccination or through collective immunity.

Germain Marchand, secretary of the Council of the Holy Metropolis of Abkhazia, said that religious organizations responded differently to the pandemic. On the territory of the former Soviet Union, most churches refused to take seriously the threat of infection and death from the coronavirus and refused to close churches. As a result, many of them not only became victims, but also contributed to the infection of their colleagues and parishioners and the churches became centers of the spread of infection.

A completely different attitude was shown by the clergy of the Greek-speaking Orthodox world. They listened to the opinions of doctors and immediately closed the churches.
Of course, the closure of churches hit hard the financial condition of the parishes, but it helped to save humans.

He recalled the movement of Hesychasm that had a great popularity in Christianity for many centuries, this practice of prayer was not connected with the external skills of going to churches, attaching to icons, solemn services, but it was connected with the inner spiritual life. This direction continues to expand, its carriers are monks. According to Marchand, during the pandemic, the religious structure can adapt to any format and the Orthodox Church will have no problems in this sense.

Alkhas Djindjolya, a surgeon and the head of the operational headquarters on the protection of the population from coronavirus infection, says probably, the situation will last for a year and maybe even more. Everyone hopes for a vaccine, for collective immunity, but it will take a year or two to develop a vaccine. Scientists have to study all aspects and the long-term effects of COVID-19 on the human body.

He compared the pandemic with the First World War and the Spanish flu. Such processes have always been in the history of mankind and will be in the future, said Djindjolya: “There was the First World War, there was “Spanish flu” and at that time, radio and newspapers were widely introduced. And now instead of the radio and newspapers there is Facebook, instead of the Spanish flu – COVID-19. Humanity has sacrificed 100 million humans for this modernization, it is very sad, but apparently, it is part of human biology. All these terrible processes have occurred and will continue to occur, therefore, it is not necessary to worry about the fact that Masons, Jesuits, reptilians, Gates are trying to reduce the population. When we devour all our resources, we will be reduced any way. There are completely opposite points of view and you always need to listen to both of them in order to understand that the truth is somewhere between.”

The organizer of the meeting and the employee of the Center for Contemporary Art, Ilona Mirtskhulava, asked what the head of the operational headquarters thinks about the implementation of digital technologies and human microchip implantation. Alkhas Djindjolya was very skeptical about the attempts of Russian experts to see a reptilian conspiracy in a pandemic and urged them who were influenced by such theories to turn off Facebook in their head: “Ilona Mirtskhulava: Veduta is the head of the artificial intelligence section and Alpidovskaya too. They consider the introduction of digital processes can lead to human microchip implantation and, as a result, to their management. What do you think of this?