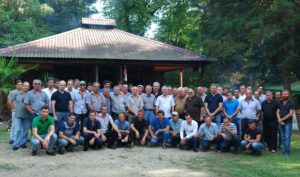 Ethnologist Roman Chanba in his article “The village of Mgudzyrkhua (Economy and Culture in the Past and Present)”, published in 1970, tells the curious story of Plato Dbar about the history of the appearance of the forbidden day (amshara) among representatives of the surname Dbar, who lived in the village of Mgudzirkhua, Gudauta district.

Plato Dbar (born in 1910) was a famous storyteller, he knew almost all Abkhazian legends about Nartaa. He was the father of the hero of Abkhazia, General Sergey Dbar (1946-2002).

“Plato Dbar,” writes Roman Chanba, says: “Once upon a time, 80 people landed on the banks of the Mgudzyrkhua River. One of them guarded the boat. They did not look for cattle or horses, they wanted to catch people and sell them. When Abdykhua Dbar found out about this, he armed with a saber and went to fight with them. He killed 78 people, his saber broke several times and became a short sword. The leader of incursions ran to the boat. Near the bank of the river, Abdykhua overtook him and mortally wounded him. Abdykhua covered the leader with burka and was going to return home, but at that moment a man who was guarding a boat shot him and mortally wounded him. “When the murderer found out that his comrades hadn’t captured anyone and hadn’t returned, he sailed away.” Abdykhua Dbar returned home and said to his people that he was dying. He passed away on Friday morning. “This day,” says Plato Dbar, “in the old days, our clan considered it special when no one of the clan had the right to work.”

As we see, the main character of the above story, Abdykhua Dbar, was killed by a firearm and the only person who had a gun apparently was the man who guarded the robbers’ boat. It is believed that in Europe firearms appeared in the XIV century. Among the inhabitants of the Black Sea coast, it could be spread in the XV – XVI centuries. Abdykhua Dbar used a saber in fights, i.e. he did not have a firearm. In the XIX century most of the male population of Abkhazia already had various types of firearms, which came here mainly from the territory of Ottoman Turkey. Thus, the story told by Plato Dbar, apparently, could actually have taken place in the 17th and 18th centuries, when robberies and human trafficking flourished on the coast of Abkhazia. Although, this topic needs a more thorough investigation.

The day of death (Friday) of the hero of the story Abdykhua Dbar, who saved his relatives from a terrible fate (they could have been captured, taken out of Abkhazia and sold into slavery), was a special day for residents of Mgudzyrkhua village (for representatives of the surname Dbar). From the day of the death of Abdykhua Dbar, every Friday they refused to work, to trade, etc., in memory of the person who saved them.

The story of Plato Dbar is the only ethnographic material, which explains one of the reasons of the forbidden day’s origin (amshara) in the Abkhazian tradition. In addition, it is clear the logic of those people, on forbidden days (амшшьарқәа), why they did not work, didn’t trade, men didn’t shave, women didn’t embroider, etc. Thus they pay tribute to the memory of the hero or to any important event in their life. Unfortunately, nowadays, the forbidden days (амшшьарқәа) began to acquire the features of pseudo-rites, under the influence of pseudo-religious figures (аҵааҩцәа, адырҩцәа, аԥшҩцәа).

A vivid example of this is the ban of funerals and memorial days on such forbidden days.